In honor of Connected Educator Month, I will share what I have been meaning to write about for a month now… getting teachers connected on Twitter! 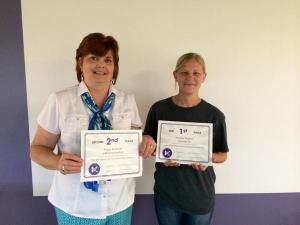 In August, I led a couple of optional, face-to-face trainings on Twitter for teachers and principals in my district. Most of the resources I used for the trainings can be found on my site. (Hint: TodaysMeet worked out great to have people paste their twitter handles and follow each other during the training!) I know Twitter can be confusing to people at first, so I tried to think of a way that would encourage teachers to further learn about and actually use the powerful networking tool once we left as a group.

I thought a 30 day Twitter challenge would be the perfect way to encourage the use of Twitter and make sure teachers continued to network with teachers in other buildings in the district and with educators outside of our district. I assumed I would be pleased with the results because after all, once you can convince an educator to open their mind to Twitter they’re pretty excited about the sharing going on. I never expected to be as impressed with the connections being made as I was.

To prepare, I did a quick search of the hashtag we used to make sure no one else was using it and compiled a list of challenges for each day in a Google Spreadsheet. Challenges consisted of things like following other educators who teach the same subject, sharing a favorite resource for the classroom, and other quick, easy tasks. At the end of each of the trainings I told the teachers and principals about the challenge and that it would be starting the following week. Once it had begun, I tweeted the challenges each morning and afternoon.

Actually, I have a confession to make. I scheduled all of my challenge tweets ahead of time in Tweetdeck! This helped me make sure I didn’t forget to send it one morning. It was that easy to get started, and it took on a life of its own.  As the challenge progressed, I noticed participants tapering off, which was expected. But as they stopped completing my daily “challenges,” I noticed they kept tweeting on their own and began using Twitter with their students, staff and for their own PLNs… EXACTLY what I hoped would happen! Many teachers joined in on the challenge after it started or created their own Twitter accounts because someone in the challenge encouraged them to participate, and they heard that others were having fun with it. I made a Storify to summarize the challenge and share with others.

To implement your own challenge, here are my suggestions:

Overall, the feedback from teachers was great, and the Superintendent was very happy to hear more of our teachers were joining Twitter! In a training I led yesterday, one of the participants shared a resource she found, “on Twitter” with the rest of the teachers in her department.  I was thrilled to hear that teachers are still actively using Twitter as a part of their own PLN and as a result of this challenge!

How have you encouraged educators to become active on Twitter?

Tech To You Later!
-Katie

My blog has moved! For all current updates, go to:

Other Blogs I Love:

Talk Tech With Me Archives